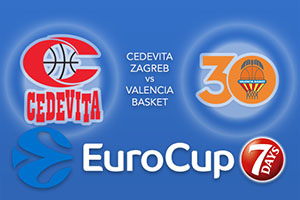 Both of these teams may consider themselves unfortunate to be playing each other in the Top 16 of the EuroCup. The Zagreb side picked up a 6-2 record in the regular season while the Spaniards progressed with a 7-1 record. This means both of these teams played very well and would have preferred for their dominance to be better reflected in their choice of opponents at this stage of the tournament. It should make for a fantastic match on Wednesday night.

Cedevita managed to lose their opening two fixtures of the regular season but a 6 game winning streak turned their season around, allowing them to finish in a strong position. They’ll come into this game with confidence and they’ll look towards Miro Bilan to make a difference. Bilan has offered an average of 14.5 points per game, with an average of 6.6 rebounds per game as well, and he has been hugely influential for Cedevita this campaign. There has also been support from Rashad James who has chipped in with an average of 10.3 points per game so far this season. There are plenty of players that can make a difference for the Zagreb side on Wednesday night.