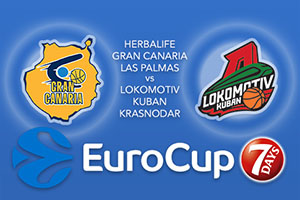 All of the Group E clashes this week take place in Spain, a feature that will be quite common in the Top 16, given that three out of the four sides hail from Spain. Lokomotiv Kuban Krasnodar are the outsiders in the group, with respect to odds and geography, and they know that they’ll have to up their game from a difficult regular season. There will be expectations placed on the hosts, which could create a level of pressure for this clash.

The hosts should be able to take control of this game and you can back Herbalife Gran Canaria Las Palmas at -7.5 at odds of 1.90. Anyone looking for the Over/Under market will find that going OVER 160.5 at odds of 1.90 should be interesting. Bet Now!