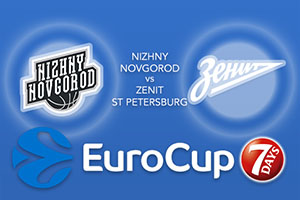 Group G in the EuroCup Top 16 gets underway with an all-Russian clash and these sides have met on European duty before. There have been two European games between these sides and at the moment, there is one win each, so there is a lot to play for in Novgorod on Wednesday night. The hosts had a 4-4 record in the regular season while Zenit held a 6-2 record.

You can see why the away side are favourites for this clash and you can take Zenit St Petersburg at -4.5 at odds of 1.90. Anyone looking for the Over/Under market will find that going UNDER 174.5 at odds of 1.90 is a decent bet. Bet Now!