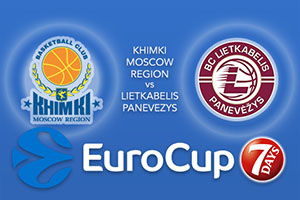 Khimki are no strangers to the Top 16 of the EuroCup and they are well fancied to progress from Group F. After all, the side from Moscow has triumphed twice in the last five years of this tournament and they are yet to lose at home this season. Panevezys are playing in the Top 16 for the first time, this is their first ever EuroCup campaign, but they know that if they can get through this game unscathed, they have a good chance of progressing, or at least build confidence for the rest of the group.

The hosts should have enough to win convincingly but take Lietkabelis Panevezys at +16 at odds of 1.90. Anyone looking for the Over/Under market should go UNDER 167.0 at odds of 1.90. Bet Now!