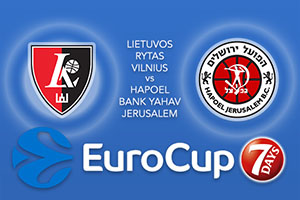 Both of these teams are past winners of the EuroCup and they’ll both be desperate to get off to a good start in the EuroCup Top 16. The hosts have a 3-5 record while the away side comes into this clash with a 5-3 record from the regular season. The sides have clashed four times previously on EuroCup duty and it is Rytas who leads the way, holding a 3-1 record in games against Hapoel.

While both teams will think they can win this game, the hosts will feel they have something to prove in this EuroCup Top 16 clash. Take Lietuvos Rytas Vilnius at -4.5 which you can find at odds of 1.90. Anyone looking for the Over/Under market should go UNDER 164.5 at odds of 1.90. Bet Now!