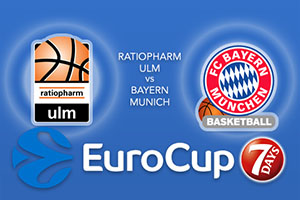 This is an all-German clash so the two sides will know each other very well coming into this game. The teams have met twice in European competition so far and both side has a single victory each, so there is a lot at stake in this game. The hosts had a 4-4 record in the regular season while Bayern Munich came through with a 6-2 record by the end of that stage of the Eurocup.

Ulm come into this game having lost three of their four most recent EuroCup games, so they know that they have a lot of work to do. However, they have only lost one home game all campaign, so that will provide them with plenty of confidence for this game taking place in the Ratiopharm Arena. The home fans will be looking towards Chris Babb as he has provided an average of 13.4 points per game so far this season. There has also been good play from Raymar Morgan, who has offered an average of 12.6 points per game while Per Guenther has chipped in with an average of 9.1 points per game.

Bayern Munich want more of the same in EuroCup Top 16