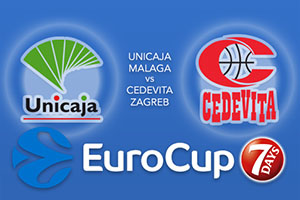 This may be the first clash between these sides in the EuroCup but they did meet four times in the Euroleague. The Spanish side won every game and it is the Spanish sides that comes into this Group H clash with the better record, having won their opening game last while Zagreb were defeated.

Malaga got a big win in Berlin and they’ll fancy their chances at home in front of a noisy fan base. A player that is likely to be a big factor in the outcome of this game is Kyle Fogg, who has provided an average of 14.7 points per game while Jamar Smith has also been in decent form, providing an average of 13 points per game. Dejan Musli has also been in fine form, providing an average of 12.6 points per game. These are the players that are likely to make a difference in this game so if they find form, it is likely that Malaga will be moving to a 2-0 record. Malaga has the third best defensive record in the EuroCup this season, averaging 76.5 points per game, so they are in with a shout when it comes to grabbing wins.

Zagreb were on a good winning run at the end of the regular season but the step up the Top 16 saw them lose out in the opening match. A narrow home loss to Valencia was a tough way to get the campaign started but the away team will fancy their chances of pushing this game to the limits. Miro Bilan has been the go-to guy for Cedevita with an average of 13.9 points per game and an average of 6 rebounds per game. Another player that has been providing support for the team was Rashad James, who has provided an average of 11.1 points per game. There has also been the introduction of Ryan Boatright, who has only played three games but he has made an immediate impact with 37 points in the opening game of the Top 16.