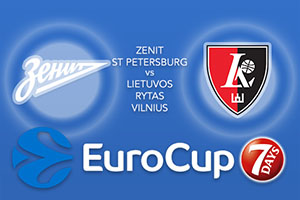 Both of these sides lost last week in Group G in the EuroCup so the loser of this game will be marooned at the foot of the table. There have been two European clashes between these sides before and it is the Russian side that holds the advantage, having won both of these games. Both teams have strong offences, ranking fourth and fifth on the list of scorers in the tournament. The defensive records are also similar so we could be in for a close game.

Zenit lost out in Novgorod last week but they will be glad to be at home and confident of grabbing a win that will push them up the table. One player that has been in tremendous form for the season has been Ryan Toolson, who is the top scorer in the EuroCup. His record of 22.8 points per game marks him out as a player to watch in this game and the home fans will be hoping for a big showing from him. Stefan Markovic has provided an average of 12.1 points per game but is the leading player in the league for assists, coming in with an average of 9.6 assists per game. Janis Timma has also been in fine form, offering an average of 16.6 points per game.

Rytas need a win in EuroCup