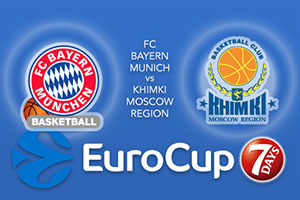 This is a game between the sides that grabbed a win in the opening week of the Top 16 in Group F and whoever wins here but will be clear at the top of the table, for this week anyway. This means that there is plenty of incentive for both sides and these two teams have met twice before in European competition with the Germans triumphing in both games.

Khimki Moscow Region are a strong EuroCup side