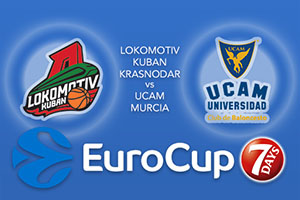 Both of these teams won their opening Top 16 game last week and with Gran Canarias losing on Tuesday night, the winner will create a bit of a gpa between themselves and the initial favourite for the group stages. That should be a strong incentive when these two sides clash in Krasnodar, for what is going to be the first ever meeting in the EuroCup for these teams.

Murcia won a European game against Spanish opposition last week and considering the EuroCup Group E has three Spanish teams in it, this will need to be a feature of their campaign. That big win gives them a platform to push on but this is the only game they’ll play outside of home shores in the Top 16 and it is likely to be a tough task. Facundo Campazzo has provided an average of 14.8 points per game while Billy Baron has offered up an average of 13 points per game. Vitor Faverani has also been a key player, providing an average of 11.6 points per game.

The bookies make the hosts big favourites for this game and you can back UCAM Murcia at +11 at odds of 1.90. If you have an interest in the Over/Under market, you can get involved at UNDER 156.5 which is on offer at odds of 1.90. Bet Now!