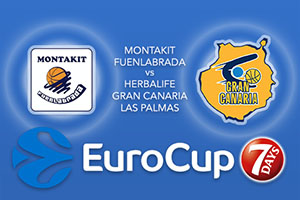 These two Spanish sides clash in Group E in the EuroCup on Tuesday night and both of these teams will be looking to bounce back after a defeat in their opening Top 16 game. While these two sides are very familiar when it comes to domestic competition, this is the first time that they have faced off in European competition, so there is likely to be some added spice to this basketball game on Tuesday evening.

Gran Canaria need to bounce back in EuroCup

The away team will be desperate to get back to winning ways and you can take Herbalife Gran Canaria Las Palmas at -6.6, at odds of 1.90. If you’re looking for the Over/Under market, go UNDER 166.5 at odds of 1.90. Bet Now!