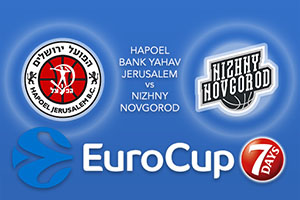 Both of these sides won in the opening week of Group G in the EuroCup so we should have a match between two sides with a great deal of confidence. These two sides have clashed on five occasions in this tournament and the lead lies with Nizhny who have triumphed three times to the single victory of Hapoel. Both teams enjoyed an up and down time in the regular season but with one team set to take a 2-0 record at the start of the Top 16, this is likely to be a big match this midweek.

Nizhny need another win in EuroCup

The bookies make the hosts clear favourites for this game, so take Nizhny Novgorod at +9 at odds of 1.90. If you’re looking for the Over/Under market, choose to go OVER 169.0 at odds of 1.90. Bet Now!