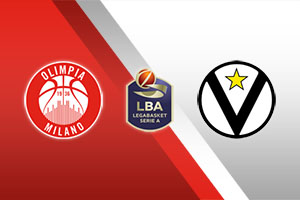 In a series that goes by the best of 7 system (2-2-1-1-1), Armani and Virtus will play for this year’s title in the Italian Basketball League.

Milan did not find it challenging to overcome the obstacle of Venezia in the semifinals (3-0). In game 3, Punter (19 points) and Hines (17 points) stood out, while the American centre was also named MVP of the series.

Armani and Virtus also crossed swords in the Super Cup final last September. At that time, Milan had easily won the cup, under the abnormal conditions that the games were played in the early Covid-19 times.

Messina’s team plays with great psychology, especially after winning third place in the Final Four of the EuroLeague in Cologne. For game 1 of the Finals series, the Milanese are expected to line up without any problems.

Virtus had to try a little harder than their competitors tonight but also won their semifinal series against Brindisi by an emphatic 3-0. They return to the finals of the Italian league for the first time after 14 years! A magical night for Milos Teodosic, who had 29 points. All players are at the disposal of coach Sasa Djordjevic.