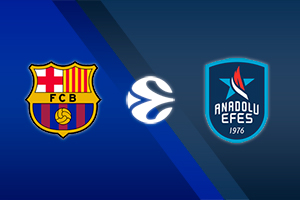 The finest hour is now for this year’s Euroleague, which is coming to an end with tonight’s final at the Lanxess Arena in Cologne, Germany!

Sarunas Jasikevicius’s Barcelona will face Ergin Ataman’s Efes, with the stakes being sky-high.

If the Blaugrana win, they will add a 3rd trophy to their cabinet, while if it is the Turks who reach domination, they will experience this great success for the first time in their history.

In Friday’s semi-finals, we were witnesses to two high-suspense movies. For the first time in the history of the Euroleague, both the two semi-finals have been decided on the final shot!

Although taking a lead of 21 points against CSKA, Efes was lucky in the end and got the ticket to the final(89-86).

Barcelona also had a double-digit difference against Armani for most of the game; however, they never came out on the floor after half time and the 16-29 score of the 3rd quarter led to a dramatic finale. During the 4th quarter, Barca played an adamant defensive game, allowed only 11 points and but eventually needed the “big shot” from Kory Higgins (11 points) to celebrate at the end (84-82). They return to the Euroleague final after several years and millions of dollars spent.

Coach Ataman has all the players at his disposal. On the other hand, Barcelona suffered from a severe injury towards the end of the game on Friday. Nick Calathes (8.0 points, 6.6 assists, and 3.3 rebounds) sustained a sprain in the 37th minute of the semi-final (the 31-year-old point guard had 17 points and 6 assists until that point) participation will be decided shortly before the final starts.

On the other hand, Saras expects a much better game from Brandon Davies (scored only two points and “downed” two rebounds on Friday); and of course, Mirotic needs to man up,  show his quality and prove that the brave amount of money Barca spent to get him on-board was money well spent. He might have scored 21 points with 10/13 free throws in the semi-final, but tonight he needs to get his hands on the ball when it is burning.