The story of Anadolu Efes Istanbul dates back to 1976 when a failing second division club in Turkey was bought by Efes Pilsen S.K. The club had an almost immediate impact, going through the 1978 Second Division Championship without defeat. This saw the club gain entry to the top flight, a status they have held without break since, and the team managed to win the top flight in its first season, the 1978/79 campaign.

A change to the advertisement of alcohol and tobacco in 2011 saw the name of the basketball team change to Anadolu Efes S.K. The club is rightly proud of the impact it has had on Turkish basketball and with 13 Turkish Basketball Super League titles, they are the team that has won the Turkish title the most.

The sponsorship story of the club is a simple one, having been owned by the Anadolu Efes beer company since their formation.

The Abdi İpekçi Arena and the Sinan Erdem Dome 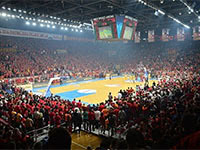 Anadolu played their home games in the Abdi İpekçi Arena in Istanbul until 2010, which when it was used for basketball games had a capacity of 12,270.

Since 2010 Anadolu Efes Istanbul transferred to the Sinan Erdem Dome, which has a capacity of 16,000 for basketball games. This venue was also the host for the FIBA World Championships in 2010, the Euroleague Final Four in 2011 as well as in 2017 and the FIBA EuroBasket tournament in 2017.

The team also has a practice facility, which is located in the Bahçelievler district of the city.

While the side hasn’t won the most recent domestic title, there is still a huge level of respect for the success that Anadolu have achieved in their history in Turkish basketball.

Anadolu were runners in the FIBA Saporta Cup back in 1992/93 and then went on to win the 1995/96 FIBA Korac Cup. This was the first time a Turkish basketball side had won a European tournament. Anadolu have also made themselves a strong fixture of the Euroleague and they have taken third place at the Final Four event in 1999/00 and again in 2000/01.

International success has been harder for Fenerbahçe to achieve but in the 2014/15 season, the club reached the Final Four of the Euroleague, bowing out to eventual winners Real Madrid in the semi-final matchup and then losing in the Third and Fourth-placed game to CSKA Moscow. The club is a well-regarded name in the Euroleague and Turkish fans have enjoyed a number of major results from Fenerbahçe over the years.

During the 2019/2020 Euroleague campaign Anadolu Efes Istanbul came out as the regular season winner, but unfortunately they never got a chance to prove their talent as this season was canceled because of the global COVID-19 pandemic.

Anadolu made history in 2006 when they became the first Turkish team to play against an NBA side.

The Istanbul side played two games in the USA in October of 2006 and then in 2007, Anadolu welcomed a NBA side to Turkey. Anadolu’s record against NBA teams stands at: 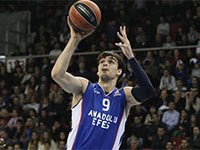 Dario Šarić, Petar Naumoski, Bootsy Thornton, Michalis Kakiouzis, Stephane Lasme and Igor Rakočević are some of the more prominent foreign players who have made a positive impact on Turkish basketball for Anadolu Efes.

Current players that stand out on the Anadolu Efes roster are Shane Larking (USA) and Vasilije Micić (Serbia).

In February of 2017, there was a ceremony for the retiring of the number 7 jersey in honour of Petar Naumoski, from the Republic of Macedonia. Naumoski played for the Turkish side between 1992 and 1994 and again between 1995 and 1999.

The club was founded in 1976 and initially named Efes Pilsen S.K. In 2011 the club changed it's name to current Anadolu Efes S.K.

“Our greatest glory is not in never falling, but in rising every time we fall.” Confucius probably didn’t have modern day athletes in mind when he made his famous quote about bouncing back, but the best names in the leading sports know a thing or two about bouncing back from adversity. This is why many... Continue Reading »

Thursday 27th May – The Final Four Is Upon Us

We’re nearly there. The wait has been long but by the time this weekend is over, the EuroLeague champions for 2020/21 will be known, and we will be looking back on what we hope is a rather exciting Final Four in Cologne. As you know by now, all four teams are in action on Friday.... Continue Reading »

Tuesday 25th May – Will There Be A Shock

While every team who find themselves in the Final Four deserves to be there, and will fancy their chances, some teams are more fancied than others. FC Barcelona were the regular season winners in the EuroLeague this campaign, and CSKA Moscow are a relentless machine when it comes to this tournament. You can see why... Continue Reading »

Friday 21st May – Will Anadolu Enjoy A Break?

The clock is truly ticking towards the Final Four in Cologne, but teams cannot afford to dwell on their EuroLeague dreams just yet. One team from Turkey is in with a great chance, but they’ve still got domestic business to manage first. Ever since knocking out Real Madrid of the EuroLeague, booking their passage to... Continue Reading »