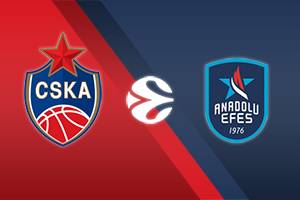 The two gladiators of the first semi-final of the night faced each other in the final of the Euroleague in 2019 in Vitoria; Dimitris Itoudis’s team had won that game (91-83) and were crowned champions for that season.

But today is a totally different story. «Lanxess Arena» in Cologne, Germany, will be the venue of the first big fight of the Final Four, with the winner getting a ticket for the Euroleague final on Sunday.

The Russian «Army Team» has participated in 17 of the last 18 Final Four tournaments. And they have won the trophy eight times in the past. At the same time, the Turks, who will play in the Final Four for the third time, are looking for their first Euroleague trophy. Serbian playmaker Misic has already been named MVP of the regular season, and we want to see whether this will be translated into an equally meaningful presence in the F-4.

Russians rely heavily on two heavy weapons: their offence (84.4 points on average in the season) and rebounds (12.7 offensive rebounds on average). At the same time, CSKA has won more fouls than any other team in the tournament, while no other team shoots more than 20.2 free throws per game. Main center Milutinov is out again tonight (missing almost the entire second part of the season). Mike James, the top scorer and top passer of the Russians (19.4 points, 5.8 assists), failed to find a communication code with coach Itoudis and is history for the Russians after the Brooklyn Nets offered him a contract till the end of the season.

The Turks of Efes now… they make just 11.2 turnovers per game, while another strong area in their game is their offence (they score on average 85.1 points per game). All players are at the disposal of coach Ataman, looking for the greatest success in his career!