With a history dating back to 1936, the team currently known as EA7 Emporio Armani Milan (or AX Armani Exchange in Euroleague games) have a long and illustrious history in Italian and European basketball. In that first season, the team was known as Pallacanestro Olimpia Milano and their red and white colours are synonymous with success in Italian basketball.

This is because Olimpia Milan are the most successful side in Italian basketball. As of the start of the 2015/16 season, the club has claimed 26 domestic championships, 3 European Champions cups, 4 national cups in Italy, 1 Intercontinental Cup, 3 Saporta Cups and 2 Korac Cups.

One of the things about Italian basketball is that sponsorship plays a big role, with the sponsors’ name being tied in with the name of the club. This means that Pallacanestro Olimpia Milano have been known by many different names over the years, with the club’s run of sponsors reading: 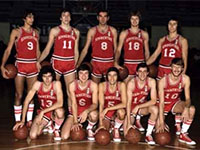 While the official title of the club has changed hands many times, there has been a constant nickname for the team over the years with the Milan basketball side being known as “Scarpette Rosse” which is Italian for Little Red Shoes. This rather quaint nickname derives from the fact that club officials imported red Converse All-Star shows for their players and the nickname was adopted quickly. Many fans and basketball observers in Italy still refer to the club in this manner.

The haul of 26 domestic championships is a record in Italy and there have been a number of notable periods of success for Milan. While the club was formed in 1936, this didn’t prevent them from making an immediate impact on the Italian league. This was shown by the fact that Milan won the national title for four consecutive seasons in 1936, 1937, 1938 and 1939.

A further 6 titles followed in the 1960s, which would be impressive by anyone’s standards but of course, this featured a tail-off from the previous decade. The 1970s were a relatively bleak period for Milan, only winning the title in 1972 and the first half of the 1980s weren’t any better, with only 1982 offering domestic title glory. There was a change in the fortunes of the club in the mid-80s though and Milan fans were treated to another period of domestic dominance.

Red Shoes are back! 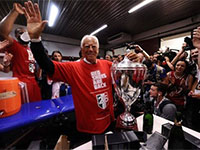 Milan would go on to win 3 titles in a row and 4 out of 5, triumphing in 1985, 1986, 1987 and again in 1989. This, to this date, is the last period of domestic dominance by Milan with just one title in 1996 and then a huge gap for their next domestic title. Some Milan fans may have felt that their next title was never going to arrive but in 2014, Milan ended a near twenty year drought of domestic championships by clinching the Italian league.

The pinnacle for European sporting teams is the tournament played out by the leading teams in the content. For Milan, this means the European Cup, or the Euroleague as it is now known as. Milan have tasted success three times in the leading European tournament.

The tournament was founded in 1958, at the end of the era of dominance for Milan in the 50s but in 1966, Milan were the cream of Europe, winning the FIBA European Champions Cup, defeating Slavia Prague by a score of 77–72. The following season, Milan lost in the final to Real Madrid. The basketball side from Varese would be the leading Italian team in the European Cup in the following years but Milan were back in the final in the 1982-83 season where they lost to Cantu, from Lombardy in Italy.

However in the 1986-87 season and again in the following season, Milan triumphed over Maccabi Tel Aviv. The 1987 triumph was won by a score of 71-69 and the 1988 triumph was clinched by a score of 90-84. These were the first two of three final defeats in a row for the Israeli side but Milan were celebrating three European titles in total. This was the last time that Milan appeared in the European final. With three wins and two runner-up spots, Olimpia Milano are ranked as the 7th most illustrious side in European Cup history. While Milan are recognised as being the leading team with respect to the Italian domestic league, they trail Varese who have appeared in 10 European finals, winning five and losing five, to be ranked 5th with respect to the European Cup.

While the 1970s were a bleak time with respect to winning the Italian League, Milan carved out a niche in the Saporta Cup, the second-highest ranked domestic trophy for European basketball clubs. This was the event where national cup winners played off against each other and Milan triumphed in 1970-71, 1971-72 and again in 1975-76.

Milan also triumphed in the Korac Cup twice, with this tournament being recognised as the third tier of European club competition. Milan in the 1984-85 season, defeating Ciaocrem Varèse, Italian opponents, by a score of 78-91 in Brussels. Milan were triumphant against Italian opposition again in 1992-93, when they defeated Virtus Roma by an aggregate score of 181-201. Milan won the first leg 90-95 and the second leg 91-106. Milan also lost in two consecutive Korac Cup finals in 1994-95 and 1995-96.

The Intercontinental Cup, which has been known as the FIBA Club World Cup or the FIBA World Cup for Champion Clubs, is the tournament that aims to determine who the best basketball side in the world is. Milan clinched the title of Intercontinental Champion in 1987 when they defeated FC Barcelona 100-84 in Milan. 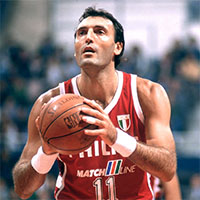 A hugely notable player, not just in Milan’s history, but in Italian and European basketball is Dino Meneghin. Meneghin is commonly referred to as the greatest Italian basketball player ever and played for Milan between 1980 and 1990 and then again between 1993 and 1994. Meneghin started his career in 1966, staying with Pallacanestro Varèse for 14 years and then sandwiching three years with Pallacanestro Trieste in between his Milan eras. In a playing career that lasted for nearly 30 years, Meneghin won 7 Euroloeague championships, a silver medal at the Olympics, a gold medal at the 1983 FIBA EuroBasket and 12 Italian leagues.

Massimo Masini is another player recognised as one of the leading 50 Italian basketball players and he won the Euroleague with Milan in 1966, and then two Saporta Cups in the early 1970s. Riccardo Pittis managed to win two Euroleagues with Milan, in 1987 and 1988 while he also won the Intercontinental Cup in 1987 as well as a Korac Cup in 1993. He managed to win 4 Italian championships with Milan. 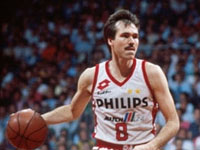 Some other notable players for Olimpia Milano include:

The history of current EA7 Emporio Armani Milan dates back to 1936 when it was founded by Adolfo Bogoncelli, a local business man.

The so called Golden Era came to an end. Olimpia Milano won 8 national championships in 10 years.

Milan won their first and only Intercontinental Cup against FC Barcelona.

The “Red Shoes” are back! It took them 18 years, but EA7 Emporio Armani Milan finally wins another championship in the Serie A Beko League. 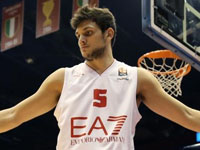 Of the current squad, Alessandro Gentile is the key player, coming from good stock, being the son of Ferdinando Gentile and brother of Stefano Gentile, both professional basketball players. Gentile has clocked up over 50 appearances in the Euroleague for Milan and holds an 8.9 average of points per game although his tally for the 2014/15 season and his current tally for the 2015/16 (at the start of December 2015) exceed this figure.

In October of 2015, the Milan side made history when they welcomed an NBA team to the Mediolanum Forum. The Boston Celtics grabbed a 91-124 victory in Italy but it provided the Italian side the chance to pit their wits against a team from the leading basketball league in the world. There is a greater level of connection between the NBA and the Euroleague so this is unlikely to be the last time that Milan face off against the very best that America has to offer.

Jamel Mclean and Oliver Lafayette are two key players for Milan in the current side, with both players hailing from the United States of America. While the Milan team has players from the USA, Croatia and Serbia, the spine of the squad is still Italian, something which helps to create a connection between fans and the club.

If the Friday night Euroleague clash in Istanbul is the most eagerly anticipated game of the week, the opposite is probably true for the match taking place in Milan. You can bet that there will be players, never mind the fans, who can’t be bothered with this game but there is a need to get... Continue Reading »

The hosts were hoping to be in the mix for the playoff spots but they are now officially out of the running, which means that there is only pride at stake at this game. Kaunas will want to ensure that their fans get a good send off in their final home game of the Euroleague... Continue Reading »

The bottom side in the Euroleague plays the team that is currently third bottom so it is safe to say that this is a game with absolutely no playoff impact! There will be pride at stake and the Milan side will want to avoid being the bottom team at the end of the season, all... Continue Reading »

The away team are out of the running as far as the Euroleague playoffs go but the hosts are still looking to clinch their spot in the next stage of the tournament. They should do this soon and a win against Milan would be virtually all the Greeks need to extend their season. There is... Continue Reading »