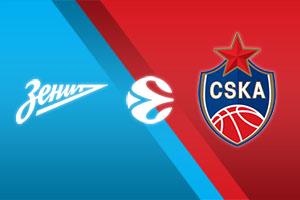 With a 3-7 record in their last ten matches for the Euroleague, Zenit has got themselves in some serious trouble. Despite the promising start of the season that raised hopes for a comfortable qualification to the playoffs, a prolonged crisis resulted in a lot of stress and the constant struggle for their entry into the Top-8. Their current 17-13 record appears very fragile when one considers the teams that fight for the same goal. Against Khimki, the players of Zenit didn’t face many problems, and the team took an excellent and much-needed breath of fresh air and hope (91-70). Most analysts believe that Zenit will have committed suicide if they manage to stay out of the playoffs. But basketball has always been a demanding sport, and Euroleague is the tourney of surprises. The good thing for coach Pasqual of the St. Petersburg team is that all his players are healthy and ready to contribute tonight.

On the other side, things are weird for CSKA. Plain and utterly odd for a team that cant control the in-house issues this season. Mid-week, another fight broke between Mike James and coach Dimitris Itoudis. The experienced Greek coach sent the American guard (19.3 points, 5.7 assists) back to his home, despite him being one of the favourites for the regular season’s MVP award. Despite the problems, the “Army Team” (20-10) holds the home advantage firmly, and the fact that they play consistently with significant absences hasn’t had an impact yet. Apart from Mike James, who will most likely be a case of the past for the Russians, reserve center Bolomboy (5.3 points, 3.9 rebounds) and main center Nikola Milutinov (9.8 p., 8.6 r.) are out of action. At the last minute, coach Itoudis will also learn if guard Darrun Hilliard (10.1 points) can play tonight since he has not fully recovered from the issues that kept him out of action lately.