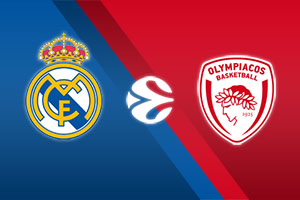 Real Madrid (18-14) walks on a tightrope. The fact that Olympiacos – that can’t make this year’s playoffs – had a solid and competitive performance on Wednesday in Valencia makes the situation unbearably tricky for the Madrilenians. Tonight’s game feels like a pre-mature final for Real Madrid. Pablo Laso won’t even be on the bench since he has been fined with a one-game ban for what he said to the three referees during the game against Efes, which was another devastating defeat to the team and himself (83-108). Randolph (9.3 points, 3.9 rebounds) and Sergio Llull (8.7 points, 2.9 assists) are out of action. Still, the real shock came up yesterday when it was announced that Tavares (11, 6 points, 8,2 rebounds), the team’s best center (and perhaps overall player this season), has been facing some issues and is doubtful for the game against Olympiacos! Real Madrid needs 2×2 wins in the regular season’s finale to have a guaranteed ticket for the playoffs.

Olympiacos (15-17) crashed Valencia at the Spaniards home on Wednesday. Led by Sasa Vezenkov (19 points average in the last 5 games of the Euroleague), the reds are doing what coach George Bartzokas asked for only a few days ago: to end the failed season with some dignity. Permanently absent Martin (C), Papanikolaou (F) and Harrison (SG) – that did not play with Valencia – should be ruled out before the beginning of tonight’s game.