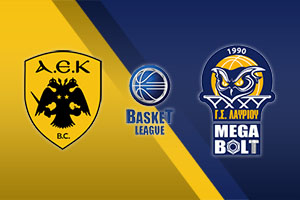 There is a derby outta nowhere in the Greek Basket League. Sometimes big games come where you would never expect them. AEK faces Lavrio at OAKA in a clash between the two top teams in the league. Both teams hold a 14-4 record, but the guests have an advantage over AEK (2-0) after two wins in the Greek championship and the Greek Cup knockout stage.

AEK appears severely affected by the defeat midweek that resulted at the end of this year’s adventure in the Basketball Champions League. The only remaining goal for AEK Athens in the Greek championship is where Panathinaikos will be a favourite. The list of AEK’s injuries is consistent lately. Center, Marcus Slaughter and great scorer Matt Lojeski cant help coach Papatheodorou ahead of today’s mission.

There are no absences for Lavrio and coach Christos Serelis, who counts 15 victories in his last 16 games in the championship! Let’s see if they can make it again!