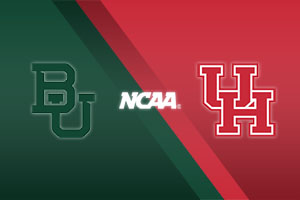 The final countdown for this years NCAA title is almost over! The first semifinal of the NCAA Final Four between the favourite (Baylor No. 1) and the underdog (Houston No. 2) will take place tonight.

There is a great thing about this game and the story behind it. The Cougars kicked out four teams in the top-10 of their region to get to the semis.

They may have a hard time when they attack (shot 32.3% against Oregon State in the quarterfinals). Still, they managed to get away victorious, mainly thanks to their excellent defence (they allow only 55.8 points on average to their opponents so far in this tournament!). Special mention to their ability to claim offensive rebounds (2nd in the country in this category), something that will give them extra chances to score! The top scorer for the Cougars, guard Quentin Grimes (18 points average), will play against the best “short” defender from all teams that are in the Final Four (Davion Mitchell, who was named “defensive player of the year”).

The Bears’ big weapon is their outstanding percentage outside the three-pointer line. With 41.1%, they were top in the country; they achieved a mere 35.7% so far in this tournament. Baylor’s will base their hopes on their leading scorer in the tournament, guard MaCio Teague, who has scored 14.5 points per match.

We expect a big battle, worth staying awake to watch if you are based in Europe. We trust in the better quality of Baylor, and our tip reflects this.