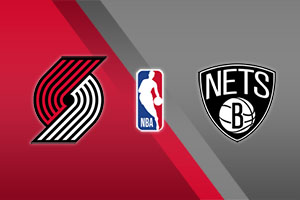 The Trail Blazers (25-17, 6th in the West) won their first game against the Mavericks in Portland but lost ground at that same stadium 24 hours later. In the second game vs Dallas, things were very different. The first-class players of the Blazers were a shadow of themselves, disappointing their fans and coaches. Lillard scored 19 points and McCollum only 13, so they need to retaliate themselves against the Nets. Nurkic is the only absentee (9.8 points,  7.7 rebounds) ahead of tonight’s match.

The Nets (29-14, 2nd in the East) didn’t have a leisurely evening against the Wizards. They might have won eventually (113-106), but for this, they needed Irving to do some magic and save the game for Steve Nash and the rest of the Brooklyn gang (28 points, 7 rebounds, 6 assists). And guess what… Kevin Durant is again out of action tonight. That might not be a surprise anymore, but the Nets will also play without Irving (28.1 points, 5.7 assists), which is an additional problem. Kyrie will miss the next three games, while things will become even more complicated if Harden – whose degree of preparation is also in question- will deprive the team of his services (25.3 points, 11.1 assists, 8 rebounds).