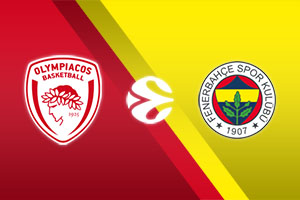 Olympiacos (14-16, 12th) is determined to exhaust any – mathematical – hopes they still have to “catch the Euroleague playoff train for this year. As Piraeus coach Giorgos Bartzokas and legendary player Giorgos Printezis stated a few hours ago, their team will fight until the end, although what they are after is a miracle. The reality is that the Reds have appeared stubborn in most recent games and want to end the season with dignity. And prove to their fans that the legend lives. Some expected absences include Martin (C) and Papanikolaou (F), but the team have slowly learnt to live without them anyway.

Fenerbahce (18-12, 6th) travelled to Greece full of confidence and pride. They have managed 13 victories in the last 15 games in Euroleague, an achievement that brought them into a position of power ahead of the playoffs. In their statements, the Turks expressed their absolute respect for Olympiacos and their legendary players: Spanoulis and Printezis. But of course, they won’t hesitate to hang up their hat at the Peace and Friendship Stadium. The only player missing the game or Igor Kokoskov is the unprepared Lithuanian forward, Ulanovas.