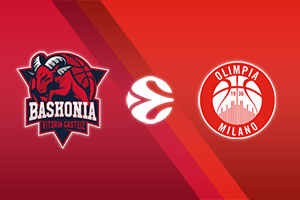 Baskonia (16-14, 10th) proved too hard to die last week in St. Petersburg. The Basques got away victorious and are still well-positioned in the battle to qualify for the Euroleague playoffs.

Baskonia were down by 14 (72-58) seven minutes before the end of the game, but with 17 straight points, they shocked Xavi Pasqual’s team. The final score, 75-79, reflects the intensity and suspense of the clash. In Spain and at the ACB Liga, they beat Bilbao relatively easily in the Basque country derby (85-72 away from home). They remained in the top four of ACB, but the win came at a cost;

Nigerian dynamic center Jekiri (6 points, 4.9 rebounds) was injured on his knee, and he will stay out of action for eight weeks! Thankfully for Montenegrin coach Dusko Ivanovic, there are no other problems for his squad ahead of tonight’s game.

Armani was somewhat disappointing in Milan last week and lost hands down to a superior Barcelona. The Catalans justified why they are on the top of the Euroleague table by beating easily one of the tournament’s strongest teams. The extent of the Italians’ loss (56-72) has alerted the group that doesn’t wish to experience similar nights soon. At a 19-11 record, Ettore Messina’s team remain at the top-four in the league, but they start feeling some pressure coming from below them. The starting point guard Malcolm Delaney (10.9 points, 3.9 assists) is consistently out of action lately, while American power forward Jeremy Evans was announced severely injured last Thursday. Evans is expected to stay away from the courts for approximately 20 days.