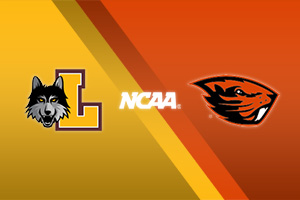 The Ramblers (No. 8) did the job relatively easily in the previous stage of knockout matches. They beat Georgia Tech and Illinois by 9 and 11 points successively, in two promising appearances that let the team and the fans believe in their future in this year’s NCAA.

The Beavers are ranked 303rd in tempo nationally, while the Ramblers are 342nd! So make sure you have a cup of coffee handy, especially if you are based in Europe and will watch the game in the late hours. In our eyes, it’s also important that the Beavers are a more experienced team, led by guard Ethan Thompson, who scored 26 against Oklahoma State in the second round. And something more to consider before you decide on your bet: the Beavers have held opponents to 30.5 shooting percentage while at the same time they shoot 38 free throws on average, the third-highest among the Sweet-16 teams.