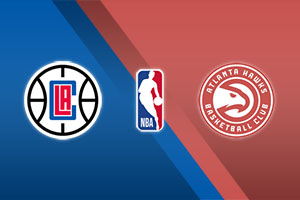 The Clippers (27-16, 4th) were in no mood for jokes in their last home game against the Charlotte Hornets. They made it clear from the 1st quarter already that they would not risk any surprises. And they dominated over the «Wasps» with the emphatic 125-98. With 21 points and 10 assists, Paul George led the Tyronn Lue’s team, while the other LA star, Kawhi Leonard, added 17 points without much sweating. But ahead of tonight’s game, the Los Angeles Clippers are suffering from two serious issues;  Center Ibaka (10.9 points) and point guard Beverley (8.3 points, 3.7 rebounds) are both injured, and Lue cant count on them for this game and maybe a few more to come.

From the day he was promoted to the first coach of the team, Atlanta… is literally “flying”. The Hawks count 8 consecutive wins, and the goal of the playoffs looks eventually achievable. Their last «victim», the Lakers in Los Angeles, lost 99-94 in a game that Collins was terrific (27 points, 16 rebounds) and the competent center Capela dominated in the air with 16 rebounds. T. Young proved once again how valuable he could be even in his not so great scoring nights, with 14 points and 11 assists. Hunter (F, 17.2 points, 5.4 rebounds) appearance in tonight’s game is still in doubt, while Dunn (G, 7.3 points, 3.6 rebounds) and Reddish (F, 11.2 points, 4 rebounds) will definitely miss the game.