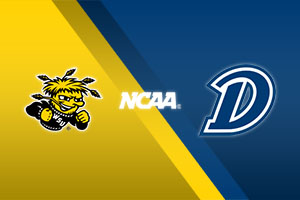 Drake was something more than impressive at the beginning of the season. They won their first 18 games, and – just as they were getting better and better – they lost their leading scorer, Tank Hempill and the starting point guard Roman Penn, both with serious injuries! A somehow dramatic pause in their winning streak that might eventually cause issues also during March Madness.

On the other hand, Wichita State had some issues during the season and lost their head coach Gregg Marshal. However, they played well enough to make it to the NCAA final tournament. During these challenging times for Wichita State, the interim coach Isaac Brown was named Marshall’s permanent replacement. A decision that we will find out soon if it proves wise. The Shockers will base their efforts on 6-foot senior point guard Alterique Gilbert, who ranked in the top-10 in assists (4.1) and steals (1.5) in this AAC season. At the same time, Tyson Etienne, who is fourth in the league’s scorers’ list (average 17.0) and also in 3-points percentage (39.9), is a man worth paying attention to during tonight’s game.

Have a look at our comprehensive March Madness Betting Guide. We encourage you to read this guide if you are new to – or want to know where to wager on the NCAA Basketball tournament.