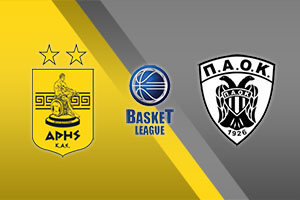 Today is Northern Greece’s ‘El Clasico’ day. The two basketball giants of the city, Aris and PAOK, will clash in a game that will prove who is the cock of the walk. Two teams with a vast history in Greek and European basketball are battling to challenge the three big teams of Athens and their dominance in the Greek Basket League over the last few years.

The former «emperor» of Greek Basketball Aris Thessaloniki (6-10) is coming from two victories, the latest over the last team on the table, Harilaos Trikoupis. With a win, tonight Aris will make it to this season’s playoffs. Coach Kamberidis’ team is in its best condition since the beginning of the league, while the coach has completed the preparation for the derby without any reported absences.

With a record of 8-8, PAOK was transformed from the day coach Lykogiannis took his seat on the bench. Roughly three months down the road in his journey as head coach of PAOK BC (since the beginning of last December), Aris Lykogiannis has transformed the team from a group of players struggling to survive in the first division into a team that will fight every game to the last minute.

Greek forward Tsalbouris (5.5 points) will miss today’s match, but the rest will all be there.