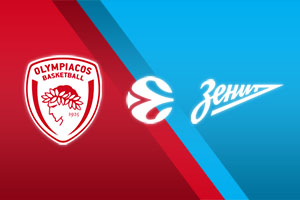 Olympiakos Piraeus (12-16) managed to stop – temporarily, maybe? – its descent in the Euroleague standings table by defeating Red Star Belgrade in Faliro last week (94-79). The Greek Reds were coming from a series of 7 consecutive defeats that resulted in the worst difference in Piraeus’ recent European history. It seems that the rest of the season will run without important goals for coach Bartzokas and his team. He won’t have available one very valuable Papanikolaou (F, 5.5 points) for tonight’s game and Martin (C, 9 points, 4.6 rebounds).

Zenit St. Petersburg (currently at 16-11) is under a bit of stress (five defeats in the last seven), while they are on -1 games due to Covid-19 (they are host to Panathinaikos in April, a game that was cancelled due to the pandemic).

In the first round’s game in St. Petersburg, Olympiakos had managed a massive hit to the Russians. But can the Reds repeat that? Two important issues for coach Pascual: Gudaitis (C, 10.6 points, 4.5 rebounds) and Rivers (6.6 points) appear unprepared.