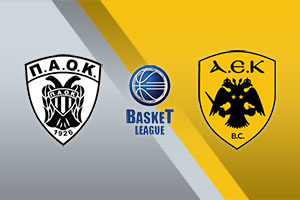 PAOK is looking for its sixth consecutive home victory in the Greek Basket League. The Thessaloniki team currently runs an 8-7 record has almost secured its entry in this season’s Greek Basket League playoffs. The change in its technical leadership has been considered a milestone in this years performance since coach Lykogiannis replaced previous coach Mexas. No absences are recorded for today’s game for the team from Macedonia.

Meanwhile, AEK (11-4) is aiming for its first away victory in three months! Yes, you read it right… the ex Champions League winner hasn’t won away from home in 3 months for the Greek League. However, in the middle of the week, they managed a vital home victory over Turk Telecom for the BCL (74-65 @ OAKA). There are many competitive problems for coach Papatheodorou. Gikas is out for a few days (Guard, 6.4 points, 2.1 assists), Moreira (Center, 13.1 points, 5.2 rebounds), Zisis (Guard, 5.9 points, 4.1 assists), Jankovic (Forward, 5.2 points, 3.2 rebounds), Matsiulis (Forward, 10.6 points, five rebounds) all injured and absent from today’s game. Tough Luck, coach Papatheodorou!