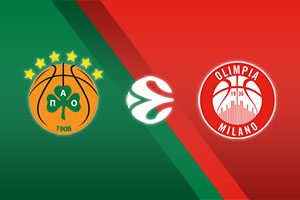 Panathinaikos did not perform even close to what the fans and the coach had been expecting against Baskonia on Tuesday. The Greens suffered a home defeat (82-97) by the Basques, although it was clear that one team was motivated and the other just felt like showing up. The Israeli coach of Panathinaikos, Oded Kattash, did not say much after the game, but we all know how demanding he is. And we know that he will be expecting his players to at least try in the remaining games. We need to see tonight if the players take this seriously, although it is evident that this isn’t the case so far. The Greens’ losses are double their wins—the worst record ever for the team that once was the top basketball club in Europe. Serbian guard and leading scorer for Panathinaikos, Nedovic, is expected to return today after two months. His injury proved more severe than initially thought, but he wants to prove he is in good shape since his new contract negotiations have already started.

Armani Milano (20-12) achieved the first goal of the season (easily won in Belgrade on Tuesday and qualified for the playoffs officially), but coach Messina said that for his team to be considered successful, they need to go further in the tournament. Delaney (PG / 10.9 points, 3.9 assists) and Evans (C / 2.8 points, 2.8 rebounds) are consistently out. Still, the rest of the Italians’ quality roster will be available and eager to leave victorious from one of the – once – tougher stadiums in Europe.