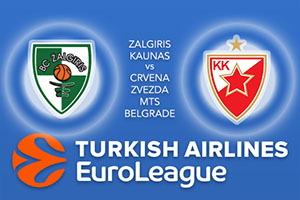 This game will be the fourth time these two sides have met in European action this century and so far, it is the side from Kaunas that has won every game. This includes the clash in December when Kaunas travelled to Belgrade and grabbed a 79-88 win. Zalgiris have a 6-9 record coming into this game while the Belgrade side are slightly better off on a 7-8 record, which means that there is plenty to play for in this Euroleague game.

One of the key players in that win over Belgrade last month was Antanas Kavaliauskas, who grabbed 20 points in the win. An issue for the hosts is the fact that they allow 82.3 points per game, which places a great deal of pressure on their attacking players to grab points. Paulius Jankunas has provided an average of 13.1 points per game while Brock Motum has chipped in with an average of 12.8 points per game. No other player in the Kaunas side has offered double figures with respect to points so this is definitely an area that needs to be worked but with two wins out of their last three games, Kaunas will have some confidence coming into this game.

Crvena have defeated the big guns in Euroleague action

Mind you, Belgrade have recently defeated Real Madrid and CSKA Moscow so they will have some confidence heading into this game. The addition of Deon Thomson is a good addition and Crvena will think that they have nothing to fear about this clash in Kaunas. In the earlier game, Milko Bjelica managed to grab 19 points while it is Marko Simunovic who has offered an average of 12.7 points per game this season. The run of form that Crvena are on at the moment will ensure they travel in great spirits and this could be enough to place Kaunas under pressure.