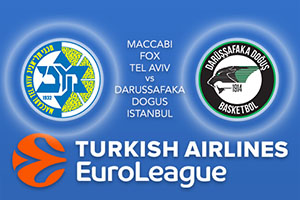 Before the game starts, there will be a lot of focus on the coaches. The Darussafaka coach needs no introduction to the Tel Aviv crowd as David Blatt has been a Euroleague winner with the Israeli side. The current Tel Aviv boss, Ainars Bagatskis has been part of the Blatt team, so the two men in charge know each other very well.

These two sides have met three times in the Euroleague with the Turkish side holding a 2-1 record at the moment. The hosts are currently 5-10 for the season while the Istanbul side are 8-7 over the 15 games played so far this campaign. The two sides clashed in December and it was the Turkish side who won the Istanbul clash by a narrow 86-84 score line.

The hosts have a slight edge when it comes to scoring points but the Darussafaka defensive record is more impressive than the Israeli side’s record and this could be the factor that makes the difference on Thursday night.