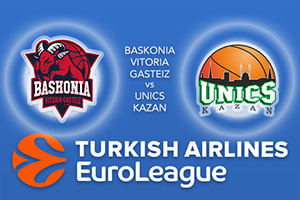 The Spaniards have been in excellent form this season, holding a record of 10-5 at the halfway stage of the Euroleague. However, this is going to be a tough task as Unics Kazan are tougher than their 6-9 record may suggest. The two sides have only clashed once on Euroleague action and that took place in December of last year!

Baskonia won 91-92 and the game was decided in the dying seconds when Toko Shengelia notched two free throws at the death. It was a tough loss for Unics Kazan to suffer but if we get anything like the drama in that game on Thursday night, we’ll be in for a cracking game. Shane Larkin grabbed 22 points for Baskonia in that game while Keith Langford offered up 28 points, a tally which is only his second best figure for the campaign.

Unics Kazan have the top scorer in the Euroleague

Both teams will think they have a chance of winning but take Baskonia Vitoria-Gasteiz at -7 at odds of 1.90. If you’re looking for the Over/Under market, choose to go OVER 158.5 at odds of 1.90. Bet Now!