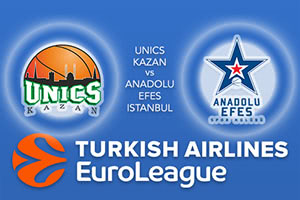 While both of these teams will be keen to grab a win in this Friday night game, it is no exaggeration to say that Unics Kazan are entering the last chance saloon with this game. The hosts have lost six games in a row and if they lose a seventh in succession, they will be eliminated from the playoff running. The Turkish side need to keep winning to strengthen their playoff hopes but for now, the hosts need for a win is definitely greater.

The previous meeting between these teams this season was a high scoring match and it was the Turkish side that came out on top that time. It was an Efes victory by a margin of 104-99 and there was a total of 24 points from Thomas Heurtel in that game. It was a notable evening for the fact that Efes served up a total of 34 assists in the game, which is a club record. If the side from Istanbul can repeat that sort of showing in Kazan, they may give the home fans a night to forget.

While it has been a terrible season for Kazan, they have had the top scorer in the Euroleague playing for them. Keith Langford has had a tremendous campaign and his average of 22.2 points per game has marked him out as one of the key performers in the Euroleague this season. There have been other Unics players in double figures, so it isn’t just about Langford but it is easy to see why focus and attention falls on him. Art Parakhouski has notched 11.8 points per game and Quino Colom has offered an average of 11.4 points per game.