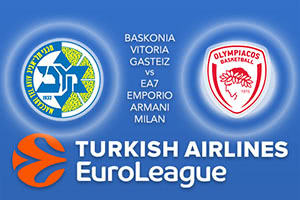 While the hosts are in the much stronger position of these two teams, both sides will be desperate to get a win as we move into the final stages of the Euroleague regular season. The hosts haven’t been on great form of late and their 12-11 record is starting to look more precarious as we head to the playoff stage. Milan have lost their last 10 road outings and with a 7-16 record, they are only focusing on getting away from the foot of the table.

Milan haven’t won too many games but they have defeated Baskonia this season, the earlier clash between these sides ending in an 88-76 score in Italy. Rakim Sanders offered up 19 points in that win and it is likely that he will need to be on form in this game. As you’d expect, Sanders is the leading score for Milan this season with an average of 13.1 points per game this campaign.

Milan will be without Zoran Dragic for the rest of the campaign, the player suffering from a keen injury. When you take on board the fact that Krunoslav Simon is also injured, the player holding an average of 11.1 points per game, and you realise that Milan don’t have their troubles to see for this clash.

The hosts know that they need to get a win in this game and it should spur them on a strong showing. With this in mind you should take Baskonia Vitoria Gasteiz at -9.5, which is provided at odds of 1.90. You can also get involved with the Over/Under market for this game and look to go UNDER 171.0 which is on offer at odds of 1.90. Bet Now!