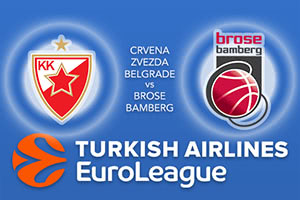 This is a big game for the hosts as they look to stay on course for one of the 8 playoff spots in the Euroleague. The away side will be keen for any sort of win that allows them to move away from the bottom end of the table and we should have an exciting and interesting game in Belgrade on Thursday evening.

These two sides have only met once in Euroleague action and this was the clash earlier on in the season. That was a thrilling game which was decided by a point, ending 78-79 to Belgrade. It was Charles Jenkins who grabbed the winning shot of the game but it was Darius Miller who is best remembered, missing a shot right at the buzzer. Milko Bjelica had a great evening, offering 18 points for the winners, while Nicolo Melli can be proud of his double-double, with 16 points and 10 rebounds, even though it counted for little in the grand scheme of things.

The hosts got back to winning ways last week and while they may not be able to replicate their lengthy winning run from earlier in the season, they will look to get enough wins together in the run-down of the regular season to allow them to continue in this campaign.