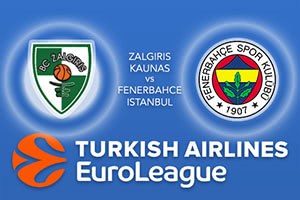 Their motivation may be different but both of these teams will be desperate in the opening game of Round 24 in the Euroleague. The hosts are sat on a 10-13 record and they have to keep going to remain in the hunt for a playoff spot. The away team are looking to be amongst the top teams in the table and they want to solidify their place for the next stage of the season. These factors should ensure we have an excellent game in Kaunas on Thursday night.

These two teams have met 11 times over the years and it is the Turkish side that holds the advantage of a 4-7 record. When these teams met earlier in the season, it was Fenerbahce who won that game, coming out on top by a score of 82-68. Ekpe Udoh and Jan Vesely were both on top form, offering 14 points each in the win. For Zalgiris, Leo Westermann had a strong performance, providing 15 points in the defeat.

The away side has one of the strongest defences in the country while neither team has showed too much attacking process and both sides stand with less than 80 points per game on average.

Fenerbahce are riding high in Euroleague

The away team start as favourites and you can back Fenerbahce Istanbul at -2, at odds of 1.90. If you are looking for the Over/Under market, consider going OVER 154.5 at odds of 1.90. Bet Now!