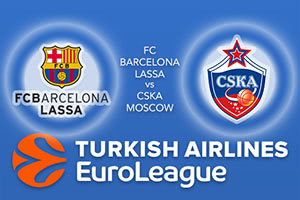 Fans of both of these teams would have found something to enjoy about the Thursday night scores in the Euroleague. This is because Real Madrid lost in Turkey. Even though it has been a terrible season for Barcelona, you will find that their fans can always see the pleasant side of Madrid losing, so the Catalan side will have had a smile on their face at hearing the final score from that game. CSKA Moscow fans will also have been delighted to hear of Madrid losing as this provides the Russians with the chance to equal the Spaniards record and join them at the top of the Euroleague.

It has been a terrible campaign for Barcelona but they are not quite out of the running. However, with a 9-14 record, they need to start winning more games soon. The final playoff spot is held by a team holding a 12-11 record and there are two teams between Barcelona and that coveted spot. There is still a chance for the Catalans to progress but they need results to go in their favour and more importantly, they need to start winning basketball games.

If results go in the favour of CSKA Moscow, they may be celebrating booking their playoff spot. If Darussafaka Dogus Istanbul lose on Friday night and then CSKA grab a win, they will become the first side to confirm their spot in the next stage of the Euroleague playoffs.

CSKA Moscow have a great incentive for a Euroleague win

When these teams met earlier in the season, it was CSKA that took control, winning 92-76; which was the sort of result you would expect given the form of these teams over the season. Nando De Colo was absent for that game but with an average of 20.1 points per game, he is the leading scorer for CSKA this season. Milos Teodosic comes in just behind with an average of 16.5 points per game.