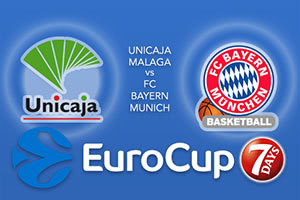 It was a big win for Bayern Munich earlier this week, and it was the 10th game the Germans have won in a row in the EuroCup. If FC Bayern can make it 11 wins in a row, the EuroCup dream will be over for Unicaja Malaga, so there is a great deal of pressure going into this game for the Spanish side. These are two teams with great defences but there was plenty of points on offer on Tuesday night and with a bit of luck, we’ll be in for more of the same on Friday evening.

The fact that Bayern had six players in double digits for the first game says a lot and it was Maik Zirbes that led the way, offering up 15 points in the triumph. There was also 13 points on offer from Reggie Redding and he was in sparkling form with respect to shooting consistency. It was a big night for Unicaja who were enjoying their first ever playoff game in the EuroCup but perhaps the occasions was too much for them. Dejan Musli provided 15 points in the defeat while Jeff Brooks grabbed 14 points. The first game in this series was the third clash between these teams over the course of the campaign and Bayern have won them all.

FC Bayern Munich look to march on in EuroCup

Devin Booker is likely to be a key player for Bayern and he has offered an average of 12.9 points per game so far this season while Maximilian Kleber has edged into double figures, providing an average of 10.1 points per game. There will be a great deal of pressure on the hosts but you can picture Bayern being a team that can deal with this sort of tension and drama with ease.

There is so much pressure on the home team to grab a win and maintain the tie, you can’t help but back FC Bayern Munich at +4.5 which is provided at odds of 1.90. When it comes to the Over/Under market, look to go OVER 157.5 which is on offer at odds of 1.90. Bet Now!