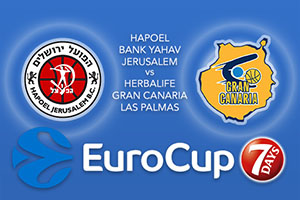 This is a quarter-final tie between two teams who have very strong records over the course of the season and we could be in line for a cracking match. This means that the home crowd are likely to be noisy but there is always a terrific atmosphere in the Pais Arena in Jerusalem. This Tuesday night game could be one of the most exciting EuroCup quarter-finals matches of the week so let’s hope that the match lives up to its billing.

Both teams also know how to win the EuroCup as Gran Canaria triumphed two seasons ago and they were in the semi-finals last year. Jerusalem were winners in 2004 and were last in the semi-finals back in 2006 so there has been a bit of time for them to find joy but there is an air of expectation from the fans.

The bookies think it will be tight and you should consider backing Herbalife Gran Canaria Las Palmas at +1.5 which is provided at odds of 1.90. When it comes to the Over/Under market, look to go UNDER 160.0 at odds of 1.90. Bet Now!