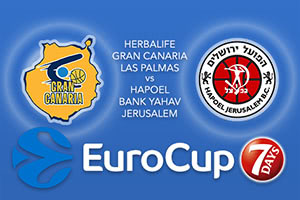 Gran Canaria have a good home record in this season’s EuroCup, winning six of their seven games at home, but unless they make it seven out of eight, their time in the EuroCup will be over. This is because Hapoel did the damage in the first tie of this match-up and on Friday night, an away win sees the Israelis heading through to the semi-final of the EuroCup.

Jerome Dyson was a massive player in that game, providing 20 points and 6 assists over the course of the evening. Jerusalem were also boosted by big showings from Amar’e Stoudemire and Tarence Kinsey who both served up 14 points each in the win. Gran Canaria need to forget about that game and recall the clash from last season when they destroyed Hapoel by a score of 108-61 in the Last 32 round last season. Given that Gran Canaria have a scoring record of 87.7 points per game, the highest in the tournament, they can definitely score points on their day.

Hapoel would love another EuroCup win

Gran Canaria need big performances from Kyle Kuric, who has provided an average of 15.5 points per game this season and Bo McCalleb, who is always in double figures for the season. These players grabbed 10 and 12 points respectively earlier in the week and they need to find some form if they are going to take this series to its third game.

Haporl will be looking for Curtis Jerrells to stand up and deliver some points, and as he has notched an average of 16.5 points per game, so far this season, he has the ability to do so. Jerrells only offered 8 points in the earlier game but that is no reason to think he’ll be quiet on Friday evening.

Given the home form of Gran Canaria, back Herbalife Gran Canaria at -6.5, available at odds of 1.90, in this clash. If you are looking for the Over/Under market, you should go OVER 160.5 which is provided at odds of 1.90. Bet Now!