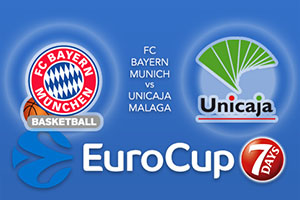 There is a huge difference between the season record of these two teams and they have already clashed twice this season in EuroCup action. These were both won by the team that is currently enjoying a 9 game winning streak, so you can see why many people are backing FC Bayern Munich to take control of this game and this tie.

The overall record for the German side is 12-2, which features a 6-2 record in the regular season and a 6-0 run in the Top 16. This is a formidable record by anyone’s standards and you can see why the German fans will be confident heading into this game. The Spaniards have a 7-7 record which is comprised of a 4-4 run in the regular season and a 3-3 record in the Top 16. It has been a season of equal ups and downs so far for Malaga in the EuroCup and they know they need to up their game to have any chance in this game.

In the two clashes between the teams this season, Bayern triumphed 62-74 in Malaga and then won a closer game at home by a score of 72-69. This means that Malaga will take some hope into this game but if Bayern hit form, they should get this tie wrapped up.