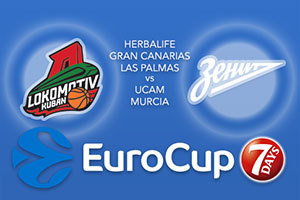 This EuroCup quarter-final tie is a game that pits an offensive side up against a team with a fantastic defensive record. It is the away side that carries the strong offensive capabilities so we could be in line for an open game in this clash, even though it is the first in a best of 3 round-up.

Zenit have been scoring at will in EuroCup action

The two teams clashed in the VTB League in December and it was Lokomotiv who grabbed a 62-68 win in St Petersburg. You can back Lokomotiv Kuban Krasnodar at -5, available at odds of 1.90. When it comes to the Over/Under market, go OVER 159.5 which is provided at odds of 1.90. Bet Now!