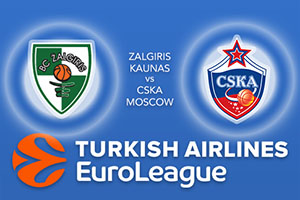 This is a game between two teams who are very familiar with each other in Euroleague action, but at the moment, their records are quite different. The hosts hold a 6-12 record while they welcome the reigning Euroleague champions who hold a 14-4 record at this stage of the season. The two sides have met on 17 occasions and the Russian side has won every one of them, holding a 17-0 record, which means the hosts will be absolutely desperate for a win to break this torrid run.

When these sides met earlier on in the season, it was CSKA Moscow who took the spoils with a 95-86 victory. That was a big night for Milos Teodosic, who provided 25 points and 5 assists in that game. However, it was even bigger evening for Paulius Jankunas who offered 30 points, which was a career high for the player, and 8 rebounds in the defeat.