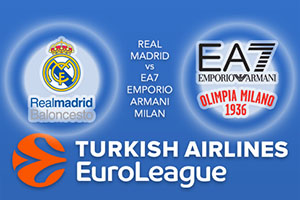 It is joint-top plays bottom in this Friday night Euroleague clash and anything but a resounding win for the hosts would be a shock. The Spanish side have clawed their way up to level billing with the reigning Euroleague champions, and they will be determined to keep on winning to place the Russians under even more pressure. The 14-5 record is an indicator of the quality and consistency of the Madrid side and it is likely that they will give their home fans something more to shout about in this game.

It has been a terrible time for Milan so far this season, especially when the team looked as they were going to have a brilliant start to the season. However, there have been some bright shoots of late and the Italians actually arrive in Spain on the back of two victories. These came on the back of 10 straight defeats but these wins will have lifted the spirits and hopefully given Milan more energy and vigour.

When these teams met in Milan earlier on in the season, it was a high-scoring clash. It eventually finished 90-101 to Madrid and it was a massive night for Anthony Randolph. Randolph grabbed a double-double of 20 points and 14 rebounds, which is a career high for the player. There is also the fact that Sergio Llull and Othello Hunter both grabbed 18 points each in the win. This game has been one of two so far that the Spaniards have hit the 100 point mark.