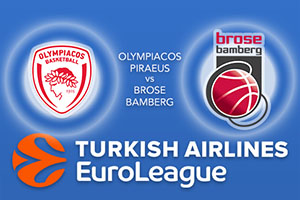 Both of these teams lost out in midweek, which means that this is a clash between sides who will be desperately trying to bounce back on Friday night. Despite that loss, the hosts are in much stronger form than their rivals heading into this game. The 13-6 record sees the Greek side near the top of the Euroleague while the Germans hold a 7-12 record and look a fair way away from the playoff positions at this point in time. Both teams have big reasons to grab a win this week if they can.

When it comes to Euroleague action, it is the Germans that hold the upper hand. This is because they have clashed on five occasions and Brose Bamberg are 4-1 in the series. The Germans have also triumphed the last three times that the side have met, which includes a 72-77 win in Greece last season. In the game between these sides earlier on in the season, Bamberg took control from the start and ended up grabbing a convincing 82-68 win. Darius Miller grabbed 20 points in total with 15 of them coming in the final quarter, ensuring Bamberg finished the tie on a high. Georgios Printezis sat that game out for Olympiacos which meant that Vassilis Spanoulis carried the burden with 15 points.