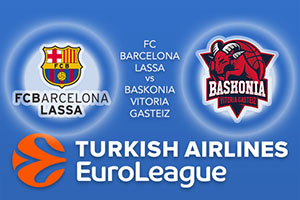 This is a game between two sides who are familiar with each other due to their domestic duties and it is the away side that carries the upper hand heading into this clash. It has been a difficult season for Barcelona, with injuries badly impacting on the team, and they carry an 8-11 record at this stage of the season. There is still a good chance for the Catalonians to make their way into the playoff spots but they need to find form and consistency quickly.

Barcelona won the league match between these sides earlier in the competition, offering them hope that they can do it in again. That was a 98-92 win after overtime. In the earlier Euroleague clash, Baskonia were trailing by double-digits but they managed to haul it back in time, winning a narrow game 65-62. Rodrigue Beaubois grabbed 19 points in the win while Ante Tomic was the key man for Barcelona, offering 18 points in the loss.

Baskonia will feel confident for this Euroleague game