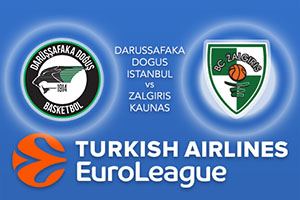 This is the first time that Darussafaka will play host to Zalgiris Kaunas and at the moment, it is the Turkish side that has the upper hand. With respect to the Euroleague season, Darussafaka have a 10-9 record while the away side travels with a 7-12 record. This means in the playoff hunt, it is the hosts who are looking stronger but there is still time for both sides to push on and consolidate their position.

There is also the fact that the two sides have only met once in Euroleague action and it is the Turkish side that holds the upper hand in that too. This is because when these teams met earlier in the season, the side from Istanbul grabbed an 80-83 win in Kaunas. The hosts held an 11 point lead in the third quarter so there was a strong revival from the Turkish side in that game but Kaunas will see it as a wasted opportunity. This should ensure that there is plenty of spice heading into this match.

Brad Wanamaker has offered up an average of 14.9 points per game for the hosts this season and he is the player that will likely make a difference in this clash.

Zalgiris are on a Euroleague high

If there is one thing in the favour of Kaunas, it is they come into this game on a high. This is because in their last match they defeated CSKA Moscow for the first time in their history. Zalgiris had lost 17 times in a row to the Russian giants but that stopped this midweek.

It could be a bumpy return to earth for the Lithuanians though as you can take Darussafaka Dogus Istanbul at -6.5 at odds of 1.90 in this game. If you are looking for the Over/Under market, go OVER 157.5 at odds of 1.90. Bet Now!