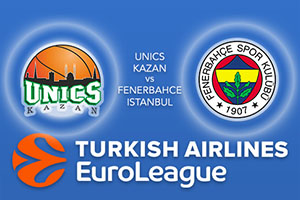 We have another double-header in the Euroleague so Tuesday night sees teams gearing up for what is bound to be an exciting week of action. Unics Kazan currently have a 7-11 record and they welcome Turkish side Fenerbahce Istanbul, who carry an 11-7 record. Both of these teams need more consistency in their results, so this is shaping up to be a big game.

These sides have met on three occasions so far in the Euroleague and Kazan are 2-1 ahead. This includes the clash earlier on in the season when Unics triumphed by a score of 73-81 in Turkey. That was a night when Keith Langford was on fire, offering 28 points and 10 rebounds in that game. The Turkish side also had a player on great form in that game with Bobby Dixon offering 23 points and 5 assists.

Fenerbahce need a win in Euroleague

These teams have weak offences, both ranking in the bottom four, so defence is likely to be the strong point of the game.